I recently blogged that I'd be speaking at the annual Texas JavaScript conference in Austin. After a few days to reflect, I'd have to say that it was not only a privilege to speak at TXJS, but also that it was a pretty special event to attend. 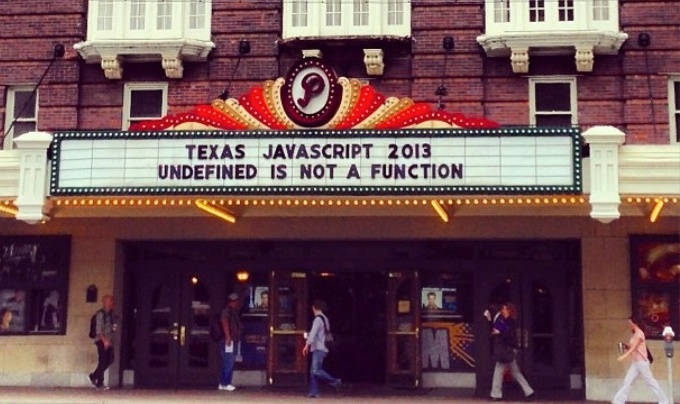 This was my first visit to TXJS, now in its fourth year. The event has steadily grown in size and popularity over the years, but Alex Sexton, who runs the event, has worked hard to retain its intimate and friendly atmosphere.

I gave a version of my "I can smell your CMS talk" along with a few aspects borrowed from another talk of mine called "Excessive Enhancement". The slides are below, and a video from the session is available on Vimeo.

Impressions of the day

This year, TXJS was a single track event. I like that as it removes that nagging feeling of choosing to see one talk at the expensive of another. Talks were also just 25 minutes long which, as an attendee, I liked. It felt like we got to see a LOAD of great talks in a single day. My head was buzzing by the end of the day.

The quality of the talks was, I felt, very high. There was a suggestion on twitter that there was less deep JavaScript content than some people would like, but the Node.js section offered a bunch of JavaScript from some proper brain-boxes which seemed to satisfy most. The variety of topics was great, with a lot of thought-provoking and inspiring content. You can see the full line-up and a growing set of coverage from the event on Lanyrd, but I've briefly picked out a few of my personal highlights below. (which was not easy)

Entertaining and inspiring. Harper spoke about his time as CTO of Threadless and as CTO of the Obama for America campaign. Some great stories and philosophies around building great teams and products.

Anyone who is still on the fence about using SASS should see Chris speak. His style of presentation has an infectious energy and he makes some great points about the value of SASS and ways to use it.

I know Frances from such places in London as "the pub", but had never seen her present a talk before. Frances' description of the award winning work going on at GovUK was both fascinating and inspiring. Real examples of truly valuable work being done to overhaul the UK government web sites, and some lessons for anyone working to produce thoughtful experiences on the web.

Jed worked rapidly through an example of building an API with numerous server-side JavaScript utilities with Node. Jed's presentation style was fantastic. With humor, energy and a staggeringly high pun count. Dense with information, yet very funny. I enjoyed Jed's talk greatly,

As CEO of Nodejitsu, Charlie had some nice insights into building a business which embraces and supports open source. As an advocate of open source myself, it was good to hear about how Nodejitsu protects its proprietary code while sharing parts of its stack as open source projects for the greater good.

Listening to Drew was both depressing and uplifting. Depressing because he reminds you of how much you procrastinate or fear failure. Uplifting because of the sheer volume of things that he has done and the message that you should just get on and pursue your ambitions. Like many of the other speakers, Drew is outrageously prolific and his talk followed the theme of his book (written in 8 days!) - how and why to execute rapidly.

I was last to speak, and was a little nervous considering the high quality of the talks that I was to follow. Plus, I was pretty much all that stood between a few hundred people and their much anticipated beer. As I started, I quipped:

I've spent the day being thankful that I didn't have to follow the current, excellent speaker... but that feeling has continued all day... until there was nobody left to lower the bar for me.

I meant it, but thankfully the audience gave a generous welcome and seemed entertained by my accent, if not my slides. As Alex Sexton told me later:

I'm adding that to my resume.